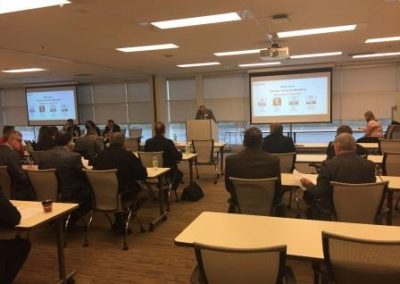 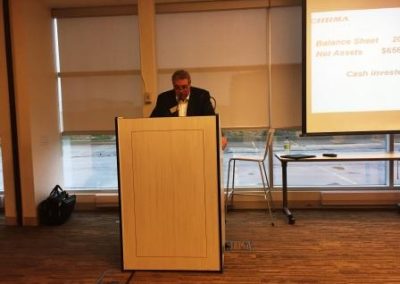 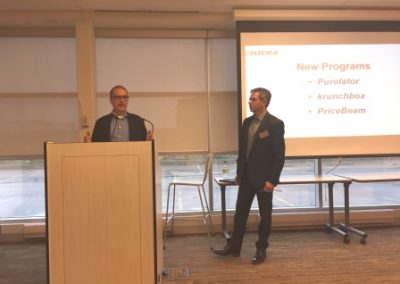 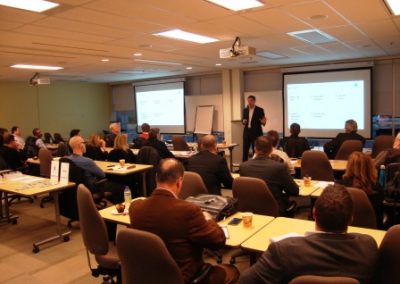 The 50th CHPTA Annual General Meeting took place on May 3, 2019 at the Centre for Health & Safety Innovation (CHSI) in Mississauga following the presentation of Pam O’Rourke from The Home Depot Canada.

CHPTA Chairman Peter Laing from Recochem and Treasurer Steve Barker from IPEX HomeRite Products, reviewed the 2018 financials. Despite the losses over the past few years, the CHPTA remains in a very healthy financial situation, however, returning the CHPTA to annual profits will allow the Association to invest further in government relations, education, programs and services for members.

CHPTA President Sam Moncada then reviewed the following three proposed by-law changes which were approved by the membership at the meeting:

16.4. At an annual or special general meeting, fifteen (15) percent of the duly appointed representatives of Full Members, present in person at the meeting, shall constitute a quorum.

16.4. At an annual or special general meeting, fifteen (15) percent of the duly appointed representatives of Full Members, present in person or their proxies at the meeting, shall constitute a quorum.

Voting by proxy shall be permitted, in the case of the AGM and special general meetings, when written notification is given to the CHPTA President at least 48 hours prior to the meeting. The proxy must name one member of the Board as their proxy, and at said meeting, the proxy shall be honoured in accordance with the terms of the proxy or, in the absence of any such terms, at the discretion of the proxy named. A proxy form will be distributed to Full Members by the CHPTA at least 15 days prior to a meeting.

3.2.7 Agency Members shall be firms, corporations or divisions of corporations such as agencies or importers who do not qualify under the criteria of manufacturers, and derive a significant portion of their income from the sale of hardware or housewares products in Canada.

The CHPTA has been asked recently to show proof by certain insurance providers that all employees of a member company are considered members of our association, otherwise these providers can possibly be fined or be subject to further actions by their industry watchdogs.

Therefore, it is proposed that the CHPTA adds a Membership Definition to the Association By-Laws as follows:

3.1.2 All employees of CHPTA member companies including Manufacturer Members, Agency Members and Affiliate Members, are considered individual members of the Association and can attend member only events as well as participate in programs and services made available to Association members.

CHPTA Director Denise Deacon (and newly elected 2nd Vice Chairman) from Oatey Canada presented the slate of candidates up for election or re-election to the CHPTA Board of Directors. Prior to doing so, she acknowledged the following directors who are stepping down from the Board:

Chris Bourke, Signify, who has taken a position with a new company; Lee Hooper, Southwire Canada, who has taken on some different responsibilities; and Shelly Mlynarczyk, Henkel Canada, who is moving into a new position within the company outside of hardware. We thank them, on behalf of all members, for their time and service on the Board.

Current Directors elected for another term were:

Directors elected for a first term were: 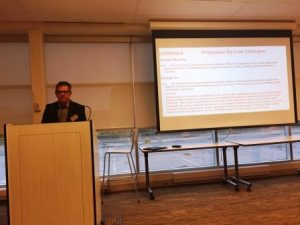 Finally, CHPTA President Sam Moncada spoke about some of the new initiatives the Association is working on and will be introducing for membership in the coming weeks including new programs from Purolator, Krunchbox (POS reporting & analysis) and PriceBeam (pricing optimization/market research).

In addition, the CHPTA is the process of updating the website and use of social media as well as a retail scorecard survey.

JOIN YOUR FELLOW MEMBERS AT A BLUE JAYS GAME

Discover the many other programs CHPTA members can take advantage of at special discounted rates.

CHPTA members enjoy access to many valuable resources including:

"[The] Annual Conference... is a very relevant, enlightening, and beneficial event, and also provides an excellent networking opportunity.”

“The CHPTA offers a good variety of products and services to choose from at a reasonable cost.

“Our HR team uses the industry salary reports to ensure we remain competitive in the Canadian landscape versus current market.”

I just wanted to congratulate all involved in organizing the 2019 Industry Day.  It was one of the best golf tournaments I’ve been to, and I’ve done quite a few!

I have attended CHPTA hosted negotiation presentations by Michael Sloopka twice. Each time I leave with more skills that are easily and immediately useful in dealing with customers.